The Carbon Footprint of a Book

The problem is that carbon footprinting anything is complex and uncertain. In theory, to find the carbon footprint of an object, you look at how it’s made, how it’s transported, how it functions, and what happens to it when it’s disposed of, add up all the sources of greenhouse gasses in all these processes, and there you go. The figure is usually expressed as pounds (or kilograms, or tons, or tonnes) of carbon dioxide equivalent–different greenhouse gasses have different warming potentials, so for simplicity we use the warming potential of carbon dioxide as a kind of standard.

The problem is that in practice literally adding up all associated greenhouse gas emissions is usually impossible. Our economy is so complex, and manufacturing chains are so long, that a single product–in this case, a book–might involve resources sourced in dozens of countries and handled in multiple factories in a dozen different countries. That’s hundreds or even thousands of steps, each of which could have its own separate greenhouse gas emissions.Totally unworkable.

Carbon footprinting depends on imagining a simplified version of whatever manufacturing process you’re looking at, one that has a carbon footprint approximately the same size as the real one. But this simplification process is always a judgment call, and different analyses of the same product can yield very different results.

There are two other sources of complication.

The other complication is that it can be hard to determine what belongs in a given object’s footprint and what does not. For example, the footprint of a book should clearly include emissions associated with felling and milling the tree used to make the paper, but should it also include the lost carbon sequestration potential of that tree? What about the car the logger used to get to the job site to fell the tree? What about the Freon in the air conditioner of that car, if the logger used the air conditioner on the way to work? And so on. Clearly one has to draw a line somewhere, but where? A particularly vexing version of this problem comes up with recycled paper. Obviously, processing the same fibers twice uses more energy than processing them only once, so recycled paper ought to have a higher carbon footprint than non-recycled paper–unless you consider that the carbon footprint of the initial processing belongs to the first, “virgin” generation of paper only, in which case the recycled paper’s footprint might be much lower.

All things considered, carbon footprinting is only a rough tool useful for estimation. Its best application is probably for comparison of several alternatives all analyzed according to the same set of judgment calls–for example, a comparison among different protein sources or different types of energy generation. The technique does not yield definitive figures. An object cannot have a known carbon footprint the same way it can have a known weight or size or calorie count.

I was able to find several different versions of carbon footprint assessments of books. The most extensive was probably one published in the Journal of Industrial Ecology, which presented the footprint of a paperback book printed in Canada on American paper. Unfortunately, that journal does not make itself available for free and I don’t have money. I was only able to read the Abstract (summary), which is available for free but does not have as much detail as I’d like.

The study came up with the figure of 2.71 kilograms CO2 equivalent (CO2-eq) per book, based on a production run of 400,000 books mostly distributed in North America. That figure applied only to the book through its production up to sale. The study also looked at three different end-of-life scenarios for these books (how long they last, how they are finally disposed of, etc.), but unfortunately the Abstract didn’t describe those scenarios or list their results.

One curious result of the study was that post-consumer recycled paper had a much higher footprint than virgin fiber. As noted earlier, that could be due, in part, to debatable judgment calls in the analysis method, which the Abstract did not fully describe. However, the non-recycled paper they analyzed came from a mill that used wood residue and other byproducts to generate power, thus substantially reducing reliance on fossil fuel and yielding paper with a lower footprint. Presumably, a recycled paper plant would not have access to such residue and is therefore much more likely to depend entirely on fossil fuel.

This analysis comes from a brochure on the environmental impact of Finnish book production. The brochure describes its methods in detail and is both easy to read and thorough. To read it yourself, click here.

Among many other interesting facts, the brochure asserts that a single book has a carbon dioxide equivalent of 1.2 kilograms. Again, that leaves out the impact of the book’s disposal. Does a Finnish hardback really have less than half the carbon footprint of a Canadian paperback? We can’t really say, because the two studies are not directly comparable, but it is possible–especially if Finland has a less carbon-intensive power grid than Canada does.

The brochure further states that the vast majority of a printed book’s footprint is in the production of its paper and in the printing process–fiber supply and transportation contribute relatively little (at least in Finland).

I also found a reference to an analysis of the American printing industry that gave roughly 4 kg CO2-eq per book and listed the use of virgin paper as far and away the highest contribution to the footprint–in apparent direct contradiction to the other two analyses. Probably the discrepancy is again due, at least in part, to details of how the analyses were completed.

What about books that don’t require paper? eReaders themselves have a carbon footprint associated with manufacture, transport, and disposal. These devices also have other environmental impacts associated with the production of metals, heavy metals, and plastics which are important but are outside the scope of the article. According to at least one study, the carbon footprint of the ereader alone is cancelled out after a few years because of all the paper books it replaces.

Curiously, the number of paper books replaced could be much higher than it might at first appear, since they don’t just replace the printed books that people read but also the printed books that people don’t read. Roughly a third of all the books that arrive at a book store are never sold. These go back to the publisher and are either pulped and recycled or added to the waste stream. Presumably, some percentage of books are actually thrown out soon after purchase as well. Incinerating or landfilling paper releases its carbon, meaning that the carbon footprint of a book in the trash is higher than that of a book in a library. If each printed book in a personal collection has a shadow-footprint of sibling-books that never made it, then switching to ebooks could carry substantial carbon savings.

But there is a big difference between a book on a machine and a book on a shelf–once a book is printed and shipped, it causes no further emissions until its eventual demise. If the book lasts as long as the tree would have, which is quite possible, its eventual yielding of its carbon could be no different than the eventual rotting of an old tree. In any case, the longer the book lasts and the more people read it, the lower the carbon footprint of reading it gets. With an ebook, reading it requires electricity every single time–and for books stored in the cloud, electricity must be constantly in use to keep those books available on servers. I am unclear whether that continued electricity usage has been included in the calculation of the footprint of ebooks.

The internet uses a fantastic amount of energy, though exactly how much seems debatable. That’s the bad news. The good news is that companies with a large online presence can use their economic muscle to build renewable energy capacity and some have done so. eBooks could therefore be a potential driver of conversion away from fossil fuel use, if the industry chooses to put its weight in that direction.

Bringing It All Together

If indeed most of a book’s footprint is due to paper manufacturing and printing, if that figure is not unique to Finland, that suggests that whether a book is printed on recycled paper is actually a lesser consideration. The real bang for the buck, as far as shrinking footprints are concerned, lies in making paper manufacturing and printing more efficient and less carbon-intensive.

In both cases, the mechanical efficiency of the plants themselves could probably be improved, but I really don’t know. The big deal is almost certainly the power grid; the carbon footprint of a book depends largely on the emissions of the power grid its production is plugged into. Since the power grid also determines much of the emissions related to ebooks, shrinking the carbon footprint of a book is really about transitioning the power grid off of fossil fuels–and paper mills, printing companies, and internet servers can all help drive the transition by demanding capacity that other users can then tap into.

So, What Does this Mean for Writers and Readers?

Arguably, the carbon footprint of a book belongs to its reader–personal carbon footprinting assumes personal responsibility for anything we buy. Since the same footprint can’t belong to two people, that would mean authors don’t bear the weight of the carbon emissions of their books–but that way lies paralysis. A reader seldom has an opportunity to choose low-carbon books over high-carbon ones, and in any case, reading materials are seldom a significant part of household footprints. Readers are unlikely to drive any sort of change, here. Writers have a little more power.

Writers can ask their publishers to take certain steps towards “greening” their processes. The publisher may or may not say yes–we live in an era when writers who are not J.K. Rowling or Stephen King have very little power–but we do have options and can explore them. I have already asked the printer I’m using now to use a paper with a higher post-consumer recycled content when possible and they said yes. This was before I found out that recycled paper might have a higher carbon footprint, but I’ll stick with it, since it sounds like virgin paper is only lighter on carbon because its production has access to alternative power generation. That implies that recycled paper could be just as climate-friendly if the mill that produces it buys renewable power. I therefore intend to ask whether we can get paper from a company that does so.

Climate-friendly paper might not be available, but it’s worth asking. If enough people ask, it might become available. 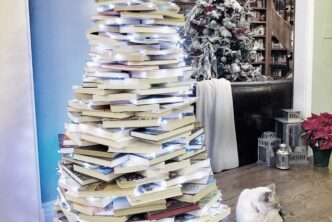 Make sure to subscribe to our newsletter and be the first to know the news.